East of Clarendon, my family came across the original starting place of the survey for the Louisiana Purchase. Originally purchased from France in 1803, the surveying of the land began in 1815 at this spot in Arkansas. Unfortunately for the surveyors, it was in the middle of a swamp. Because of our crisscrossing segments with the car, we were able to drive the two miles off our course to see the monument.

When Cathleen and I drove to the same place, the water level was two feet lower than it had been 25 years ago. We learned from a friendly Arkansan that Arkansas was suffering from a bad drought, despite all the swamps in this area. We stopped our car and walked about 1/4 mile on a special boardwalk to the spot of the original marker. I saw strange bubbles emerging from the murky water surrounding us and witnessed the gurgling of swamp creatures. A strange and colorful lizard ran across the path in front of me, and I quickly scanned the boardwalk for any snakes that might have left the swamp for a dry place to rest.

We paused to take some photographs and then drove onward towards Helena, Arkansas on the banks of the mighty Mississippi River. The same giant steel bridge was still spanning the river dividing Arkansas and Mississippi. Across the river, there had been nothing but open farmland and trees back in 1987. Today there stands a mega Indian Casino on the Mississippi side of the river.

I remember being so excited to be walking across that river so many years ago. It represented a psychological milestone, and I knew that we were only a couple of states away from the Atlantic! Our walk through Mississippi was shorter than the other states because we were purposely skirting around the city of Memphis, TN. We had avoided big cities whenever possible for safety reasons.

Cathleen and I stopped at a Mississippi Welcome Center that had not been there when my family walked. The people inside were friendly, and it felt nice to be in an air conditioned room. Within the Welcome Center, many items, articles, and pictures showcased the proud elements of history and points of interest.

A few miles down the road, we began to see living history that told a less optimistic tale of continued racial divides and the evidence of widespread poverty. 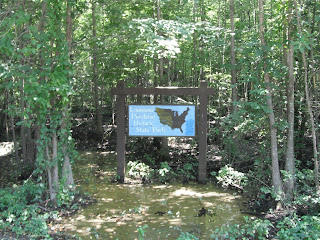 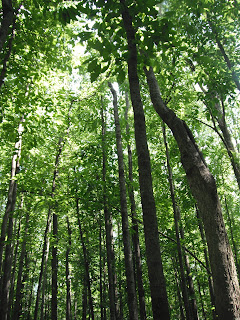 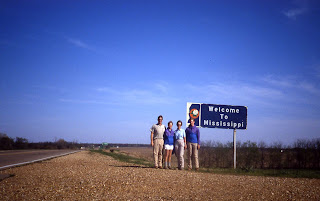