There are few places in a America more beautiful than the back roads of Tennessee. Lush green hillsides give way to valleys filled with hardwood forests. Ash, Poplar, Oak, Hickory, Cottonwood and Cedar are just a few of them. The steady hum of insects fill the evening sounds of the forest as the sun steadily dives to meet the Western horizon. Lightning bugs illuminate the deepening shade of the trees on either side of the highway. The heat of the day begrudgingly gives way to the pleasant mild warmth of a Tennessee Summer night. A canopy of shimmering silver stars begin to fill the sky.

The rural highways my family walked stretch nearly 500 miles from Bolivar, Tennessee east of Memphis to the Appalachian Trail east of Elizabethton in the northeast corner of the state. The small corner of Mississippi that we walked allowed us to skirt the large city of Memphis and afforded greater perceived safety.

Soon after crossing into Tennessee from Mississippi, my Dad and I found a strange metal tower that was built similarly to the giant metal structures that carry high voltage wires high above the ground below. Inside the structure was a metal staircase. Some might call it a ladder. It beckoned to our curiosity. Such a tower would surely be off-limits in California to keep people from jumping off, but not in Tennessee! The tower rose at least 50 yards above us. We had to climb it! After we had climbed about 30 feet, the tower began to sway under our weight and the strong breezes would shake the tower without warning. Neither one of us was afraid of heights, but we soon experienced some healthy respect and concern as we neared the top of the tower. It was then swaying more than either of us was particularly comfortable with. The view outweighed our concern as we were able to survey the terrain for miles around. The tower was built as a look-out for fires. As Cathleen and I were driving, I was surprised to see one still in existence in 2012! I didn't feel the need to climb it this time.

We awoke the next morning in Centerville, TN. Twenty-five years ago in this very town, I had spent a few nights sleeping alone above a morgue! 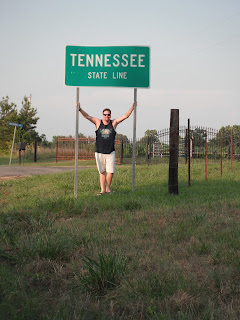