On Friday, Cathleen and I headed back to Whites City after a good night's sleep in Carlsbad, NM. As we pulled up to the Whites City Post Office, old memories began to flood my mind.

I remembered picking up our General Delivery mail so many years ago. Mr. Jim McCain, who wrote the all original Star Free Press stories including last week's article, had published our Whites City general delivery address on the front page of our local paper in Ventura. It was two days before Christmas, and we had just hiked across the desolate stretch of highway between El Paso and Whites City/Carlsbad area.  Two inches of snow blanketed the ground around us and walking into the warm inviting Post Office of Whites City was something I'll never forget. The Post Master was Jodi Tapp. When Dad walked up to the window and inquired about if we had any mail, Ms. Tapp got this huge smile on her face and said, "I've never seen so much mail in General Delivery for anyone in my entire 12 years with the Postal Service! Who are you guys!?" We had received five inches thick of letters from people back home. Many of the letters were from people we had never met telling us to press on and not give up! Many people were praying for us. The paper had recently shared about our breakdown in Eastern Arizona where we almost quit the walk. People wanted us to keep going! It was so encouraging, and now there was no way I was going to quit this goal with my family! My Dad explained to her that we were walking across America as a family. I wrote in my account that Ms. Tapp made us Christmas peanut butter brittle. This gesture made us feel so at home and welcome.

Small town America has a heartfelt friendliness that is still present today. You just might have to work a little harder to find it. Today's tough economic times have hurt a lot of folks. People are less trusting and more cynical at times.  But underneath the scrapes and cuts of losing jobs, families divorcing, losing loved ones, and social media robbing the dinner table of family interaction, there lies dormant a memory of America's resolve to never give up and never surrender. America's greatness lies in the character of its people. I am ever hopeful that we will overcome these present challenges if we just place one foot in front of the other and not allow defeat and fear to dissuade us from pursuing our dreams. I thank God for this opportunity to visit America again.

Back at the Whites City Post Office, Vicki Wood, today's Post Master, greeted Cathleen and me with a big smile after I shared my "Walk" memories with her. She even took Cathleen and my picture in front of the Post Office.  Matlin Smith of the Carlsbad Current Argus newspaper used this picture in a great story she wrote about our current rediscovery of my "Walk."

Cathleen and I said a warm farewell to Vickie and her assistant Amy, and headed up to Carlsbad Caverns. My family had visited the cave on our cross-country trek. It was mid-afternoon and the entrance to the cave was closed. The ranger informed me that we could still go down the elevator until 5 PM for 6 dollars a piece. Compared to other National Park experiences, that's a bargain! Down in the caves, a magical world awaited. The Big Room in Carlsbad Caverns is so majestic! God's handy-work is everywhere, even deep within the ground.

After a 45 minute rush through the Big Room, Cathleen and I were rushing back to Whites City to mail my Dad, Mom and brother postcards of the cave. The post office was closed. I rushed next door to a general store that sold local area souvenirs and inquired about buying some stamps. The man at the counter said he thought they might have some. After checking several different drawers, he asked the and older man who looked to be the owner if they had any. He tersely replied, "No we don't carry stamps for everybody." At that moment a customer rushed over and said, "My daughter and I have some in the car! We were going to write some postcards as well! How many do you need?" I gave her a dollar and she handed over 3 postcard stamps. That was so cool!

After mailing the postcards, we were off to Snyder, Texas and the next stage of our rediscovery! 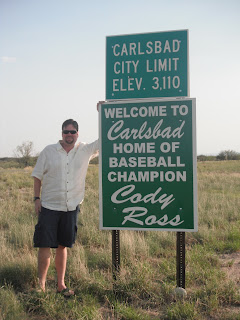