Our family continued to walk eastward out of Denton, TX. A couple days down the road, we had passed through the town of Greenville, TX. One afternoon during the last segment of the day, I could see our car in the distance. I decided sprint the last 1/2 mile and suddenly my weight came on my ankle instead of my foot. I howled in pain and dropped to the grassy shoulder about 100 yards from the car. I could not get up. I needed my Dad to lift me up, and I hopped to the car in agony. My ankle instantly began to swell. When arrived back at our motel in Greenville, my Mom carefully wrapped my ankle with an ace bandage and an ice pack. The next day my parents asked me to walk back and forth across our room to see how my ankle was holding up. I could only manage to limp, feeling intense pain in my ankle.

Suddenly we faced the reality that I could no longer continue, and we had to stop for me to heal. We took the next couple days and drove a couple of hours to the city of Longview, TX. My Dad had a college buddy named "Bud" who lived there. Bud and Sammy Austin had invited us to come over to their home for dinner. Bud had become the president of LeTourneau University at the time.

A couple of days later, I was well enough to continue. We drove back to the mile marker where we had left off east of Greenville and continued east. I wish I still had the same resiliency at 39 that did at 14! We walked six miles that day. I had a little trouble, but got through it.

As Cathleen and I drove on, we found the approximate spot where I had sprained my ankle and stopped to snap a picture. About an hour later, we stopped to take a picture in Paris. Paris, TX that is. While I was standing by the sign. An older man in a Ford pickup stopped in the middle of the road and yelled out in a heavy Texas drawl, "Y'all need he'p!?" I replied, " No sir, we stopped to take a photo." He yelled out, "Ok! I thought y'all needed some he'p! In Texas, We he'p people! Not like people in the big cities!" I was amazed! The same southern hospitality still existed today. It seems like some younger folks these days would be content to snap a picture of someone stranded on the side of the road, post it to Facebook, and then drive on without saying a thing. 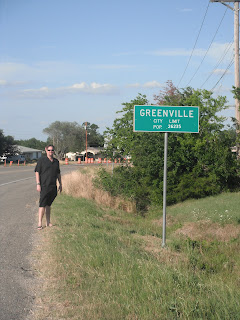 We were soon nearing the border with Arkansas. The city of Texarkana lies in Texas and Arkansas. Twenty-five years ago, my family would meet the man with the most world records in flight at the time and find ourselves staring at the route we had walked from thousands of feet in the air!
Posted by Allen Huff at 9:27 AM