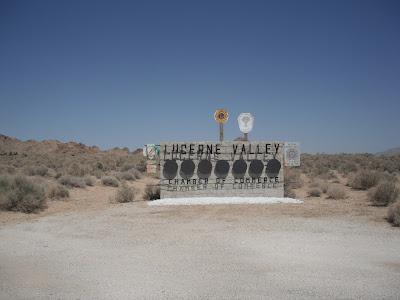 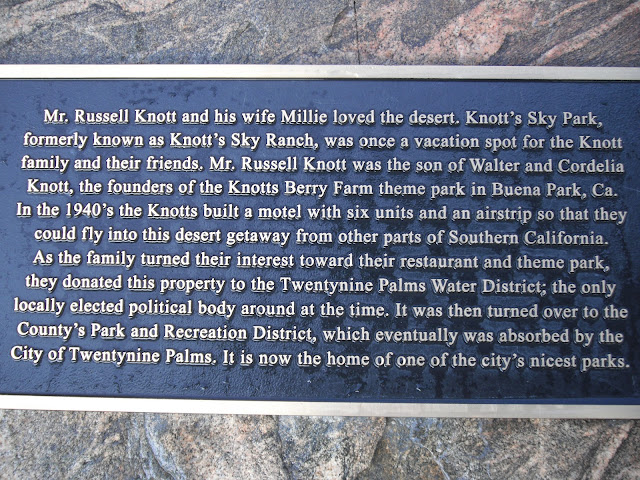 So the next day we were walking east from Victorville towards Lucerne Valley when I lost a $5 dollar bill somewhere. My Dad began chiding me and demanding that I be more responsible and "take stock" of my belongings. He was right of course, but his advice fell on deaf ears because I struggle even to this day with keeping track of my things...The funny thing is, soon after he tired of giving me an earful for losing my money so carelessly, a couple of pieces of paper caught my eye blowing about 20 feet off the highway. I left the road to investigate and found a couple of dollar bills just floating around! Dad confessed years later, that he felt convicted for his stern lecturing as if God in His infinite grace had given the money back to me.

We stopped in the approximate spot to snap a photo because it really was in the middle of nowhere. Once we arrived in Lucerne Valley, the town looked much as I had remembered it. According to my Dad's account of the walk, we had dined at Patricia's Cafe. Cathleen and I stopped a local man named Shawn, who also happened to be a preacher, and inquired about the cafe. He reminisced about how good that place was and informed us that it had been called Adelita's Mexican Restaurant for some years now. We headed over to the restaurant and had some pretty tasty fajitas and cheese enchiladas. The place now serves authentic Mexican food and its staff is friendly and helpful. We met Henry who manages the place and he gave us some history.

Driving further east into the desert we saw many "jackrabbit homesteads." This was one of my 8th grade vocabulary words from my parents. Many structures were empty with missing walls and roofs, but plenty of homes were inhabited as well making for hillsides dotted with various shapes and sizes. Soon we were driving through Yucca Valley and on to 29 Palms, were we gassed up the car and I inquired from a local sheriff deputy about a campground we had stayed at back in 1986 called Knott Sky Park. He wasn't sure, but soon another deputy drove up and she knew of the place to be a park and not a campground. She gave us directions and we drove out to investigate. Cathleen found the original preschool next to the park that we see in our videos that my grandpa took at the time. The campground is indeed a park now and looked to be a peaceful place.

Then it was out into 100 miles of nothing but creosote plants and Joshua trees. A partial solar eclipse was occurring too and I got a pretty good photo that shows a refection of the eclipse. We stopped and took a photo of "Allen Ave," a dirt road we had remarked about in our original journals. As we drove east, the traffic thinned and I could remember how many days of open space we had walked in the Autumn heat that was still in triple digits in mid October, 1986.

General Patton had trained 1000's of troops for desert combat against "The Desert Fox" General Rommel of the German Army in this very desert terrain we were crossing. Cathleen and I searched, without success, for the place we had dry camped back in 1986. It was near a dry lake bed that had been used during the previous month for a huge drug run. Unknown to us at that time, several federal agents were in position all around us waiting for another drop to take place on that very night because the conditions were perfect with a full moon. This allowed for airplanes to land without lights. The next day a CHP officer told us that we were being watched by several eyes. In their haste, the drug runners had dropped over a million dollars worth of drugs on the desert floor only a month prior...
Posted by Allen Huff at 11:45 AM